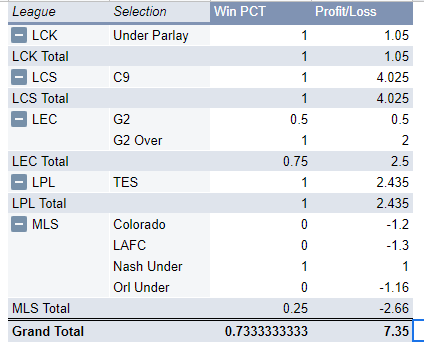 Really nice day in LoL and a tough one in soccer, haven’t written that a lot this summer!

LGD has won two playoff series so far by hard-winning in the jungle against an overrated jungler in Beishang and a below average one in Ning. That’s not happening against Kanavi. He has gotten the better of Peanut in 4 of their 5 matches this year and I think most people rate him as the marginally better player. What does LGD do well when Peanut doesn’t carry them? My answer to that is “Not a lot.” Their difference in stats from when Peanut carries to when it’s up to someone else goes from playoff team to one of the worst teams in the league.

I would take every single JDG laner over their LGD counterpart. Kramer and his supports have had a nice season, but they’re not quite on Loken and Lvmao’s level. Xiye and Yagao are very close, but I would take Yagao after seeing what he did to Knight last split. Then, there is a top gulf more than a gap. Zoom is still the best top laner in the world and Langx is a few tiers below him in my book. We saw that top laners can still carry teams courtesy of 369 this morning. I, for one, would love to see Zoom get on something like a Jax and take over. With a hard pushing top and carry jungle becoming a solid win condition on this patch, Kanavi and Zoom are about to have themselves a series.

When it comes to the underlying team stats, it’s no contest. JDG is one of the best teams in the world, and LGD is an average playoff team with a singular win condition–drake stacking. If I can identify this, JDG’s world class coaching staff can identify it. If LGD wants to win even one game here, I have a feeling they will have to show something else. I just don’t think they have anything else.

I’m skipping this one because there is nothing to play for and those kinds of games are very volatile.

There’s an argument to be made for Hanwha on talent alone, but I’m not making it. Hanwha ,despite having some near-elite talent, has been awful this split. They are clearly a team with no identity and I don’t trust them to figure it out here. Team Dynamics know who they are. They are a team who can play solid, standard LoL against the bottom of the table, but can not compete with the talent of the top teams. HLE is a clear bottom table team. I like Dynamics to get the job done.

Rogue has passed the test every time in the regular season. Every time I thought they would falter against an elite team, they stuck to their style and won the game. But I still can’t back them against Fnatic.

The regular season is not the postseason, especially when Fnatic is involved. We have seen this team spend entire months experimenting in the regular season to then turn it on come playoff time. Their ability to out think their opponents in drafts really shines in the best of 5 format. FNC has certainly had a bad read on the meta at times this split, but with a couple weeks off I’m trusting them to have it figured out.

The real reason I like Fnatic here though is talent. I give them a pretty significant edge in the top lane where Bwipo has a much larger champion pool and more consistent win conditions. In the jungle, despite an off split, you have to look at the body of work from Selfmade and give him the edge. Bot lane is again Fnatic favored, if Hylissang can get his play under control again. Rogue’s bot lane gets too much credit for just playing to not lose every game. Rogue will look for their edge to be in the mid lane where Larssen has been terrific this split. He is getting laning leads against the best mids in the league and is an excellent team fighter. My question is this: What happens to Rogue if they can’t play their front to back team fight style? Is Larssen still this effective? You have to think Fnatic will be ready to counter this style. Do you trust Rogue to have an answer? I don’t.

Still, I’ve been burned going with talent in these playoffs a few too many times now, so I’m going to play this one light and maybe get a little more involved live on Twitter.

Something I’m very interested in studying over the offseason is the effect of the “revenge game” in LoL. In traditional sports, handicappers have been all over revenge games for teams of near quality as a place for value. Anecdotally, I feel pretty confident that it exists in LoL too. When I used it as part of my reasoning for Damwon to beat DRX in the LCK, it seemed to be a real motivator. When I used it for G2 to beat up on Mad today, it came true. With LoL being so heavily influenced by preparation and countering a specific opponent, it would make sense that the revenge game would give a team an edge in matchups of similar quality. When you’ve been thoroughly beaten by something, all of your preparation goes into adjusting for it the next time you play. Whereas the winners will want to repeat what made them so successful in the first game. I think you know where I’m going with this.

TSM has more talent than GGS. I don’t think anyone could credibly argue to the contrary. Their first series was a case of Golden Guardians having a very specific plan for countering TSM and then Doublelift playing the worst playoff series of his life. Great players rarely have series like that twice in a row. Is it possible that Doublelift is just cooked? Sure, but I think we would have seen more clear signs of it in the regular season.

Generally speaking, I don’t trust TSM’s coaching staff at all, but they have too many smart players on that team to get spanked in the draft for another best of 5. It brings me no joy to bet on TSM again, but I think it’s the right side here. Over an 18 game sample size, they were the better fundamental team than GGS. In 3 games a week ago, they got dumpstered. With revenge in mind, I think there’s unfortunately value on TSM here.