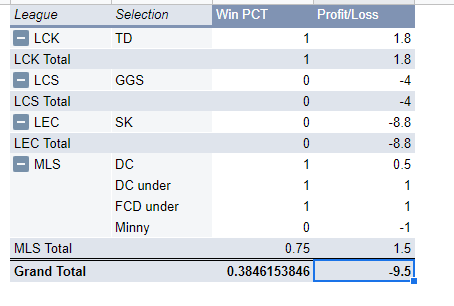 Bring on more LCS and MLS please is all I can say about today right now! In all seriousness, I think the process on SK was right, but the way I went about betting it was probably wrong. There was a lot of “win more” in how I approached today. In the future, I think I would just bet the moneyline or spread at a large size and call it good. The line was bad, but Schalke winning was always well within the range of outcomes, and if that was to be the case then all my bets were dead. Not a smart way to approach things.

To me, this matchup is all about Knight. He is just leaps and bounds ahead of Angel as a player. If Top can make him the focus and give him comfortable champions (of which he has plenty), I think they can win here with relative ease. The rest of the lanes are very close and I can’t see Suning getting serious advantages anywhere like they were able to against V5. It’s possible that Bin puts 369 into the dumpster like he did against BiuBiu, but 369 has been comfortable playing weak side all season and surprised everyone last playoffs by playing an under-control engager in almost every game. Top doesn’t need him to win for them to win.

The season-long team stats pretty heavily favor Top Esports. They lead Suning in GSPD, EGR, MLR, and the teams are tied in Baron%, but I will admit I’ve become a little wary of season-long stats in these playoffs. It does feel like the meta-game shift has heavily affected teams who were dominant in the early season like Top was. Suning’s recent form has been excellent. In the current patch, they have the top GSPD in the LPL. Still, I think you have to trust talent in these situations. Top has the game breaker here in Knight.

Here’s what I think is going to happen: Damwon and Gen.G are going to smash KT and Afreeca. But when it comes to end of season games you can never be sure of what’s going to happen so I don’t love laying all that juice for the -1.5s in these. So rather than do that, let’s parlay the unders to include the possibility that KT gets frisky and cheeses two off of Damwon. Again, I will have a lot more to say about the LCK playoffs when they are here, but for now the slates are pretty chalky.

This line is pretty unfair to the team that MAD was to begin the season, but they, like C9, fell away from the dominant team that they were to begin the season in the second half. In fact, they fell all the way down to a GSPD of 2.7% after being above 7 for a long stretch this season. It points to the struggles they’ve had getting serious leads on teams in the second half of the season. Their bot lane in particular is averaging some pretty concerning deficits in laning stats.

It’s not like their bot lane foes on G2 have been smashing people either. However, I have a higher trust in that team to get right. Last summer, there were all kinds of questions about Perkz as a bot laner and then he became one of the best in the world at playoffs and Worlds. This Spring, everyone was dying for Caps to switch away from the bot lane and then he completely bodied FNC on Kog’Maw. I have a feeling Perkz will be just fine for G2 in this series.

Elsewhere on the map, I still favor G2’s talent. Wunder is still generally underrated and would be totally comfortable carrying this series on one of the meta top carries, Jankos and Shadow are basically the pointing Spiderman meme, and despite a monster season from Humanoid, is anyone actually taking him over Caps in the proverbial gun-to-head situation? It’s what makes G2 impossible to quit. If they decide to be, they are at a significant talent advantage over every team in western LoL.

The stats are very close for these two teams, so this is pure gut. My gut says G2 wants to put Mad Lions in their place tomorrow.

At first, I thought I was going to be all over EG here. Cloud9 showed some legitimate issues in their series against FlyQuest. Their propensity to overplay their hands when they think that they can outplay a bad situation or to just egregiously chase kills is going to get them beat against FLY and TL, but I’m not sure EG is that team. Can EG with Svenskeren and GoldenGlue, two notorious hero-to-zero players, resist the temptation to try to beat C9 at their style? I have my doubts.

If you read me or check oracleselixir.com regularly you know that C9 was far and away the better statistical team throughout the regular season, and despite only having a playoff loss on their record is pretty close to EG in the playoffs as well. This is because EG has genuinely won 3 games I and the numbers thought they should have lost in this playoffs. Bang has been fantastic and played them out of losses, but that can only last so long before some regression hits. I’m also hopeful that C9 will, please for the love of god, ban Senna who is Bang’s bread and butter.

Zven arcane-shifting into his death on Ezreal can also,hopefully, only last so long. He honestly looked like he was trying to lose at times against FlyQuest and lost game 4 all by himself. It wasn’t his day, I’m trusting him to play more to his standards in this one. If that’s the case, C9 has a pretty clear talent edge everywhere else on the map.

With all of that said, I don’t think there’s much value in the Money Line or map spread, so I’m going to approach this one a little bit differently.  I have been trying to get back into making a model for kill totals for teams. It will surprise no one that C9 is still the top “Kill strength” team in the LCS, but EG also ranks as the worst “Death Strength” team in the LCS. Their elos combined with the league average total for kills has C9 getting 16 or 17 kills a game here. That’s pretty nice value on them as the books have their kill total set at 13.5.