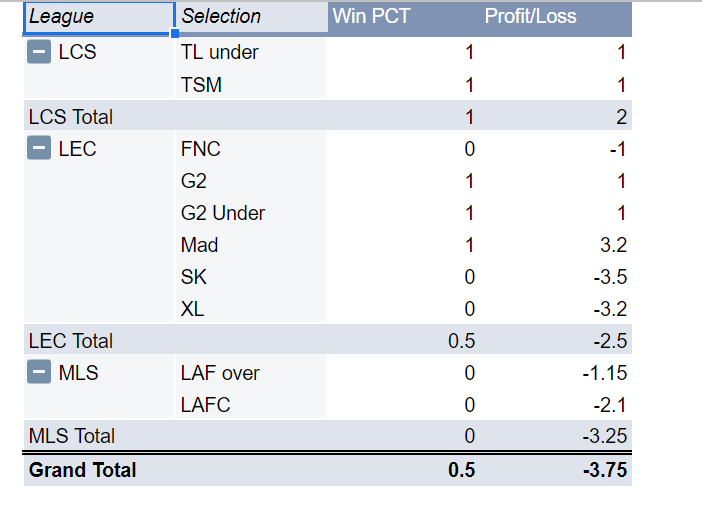 Not a great day mostly because LAFC and SK forgot how to play their respective games, but sometimes that’s how it goes. I’ve got a lot I like for tomorrow, so let’s get them there.

Let’s keep this short: there is no way RW should be -260 against anyone. These teams have near identical stats in every metric that matters. Rogue Warriors current form is definitely better, but not -260 better. I wanted to go bigger here, but LNG is also unbelievably bad.

BiliBili is 4-4 with Meteor in the lineup and have had to play IG, JDG, and Suning in that stretch. The only team that they’ve lost to in the same tier as EDG is Team WE. That was a closely contested 2-1 series. I would expect this one to go the same way. EDG will also be without Aodi who has been a bit of a rock for them this split.  There’s no clear fave in this series, so the plus money is really nice.

This is a classic IG screw around spot. They are coming off a massive 2-0 against Top and lots of folks are talking about them as the possible best team in the world, Theshy and co. almost always drop a game in this spot. OMG is not quite as bad as their record indicates. They are fully capable of taking games when their opponents give it to them. I have a feeling IG will give them one here.

I’m done betting against Rogue. This team treats every game like it’s a Worlds final. They do everything they are good at every single game. I trust them to get small advantages in every single lane against SK. They are choking teams out like EU Team Liquid. SK needs teams to get a little wild like Mad did last week to upset. Rogue doesn’t do that. I like a Rogue stomp here and as my new saying goes “stomps cover and go under”.

When I look at a matchup and can make a solid argument for both teams winning, I like to hit the over. I expect a pretty back and forth matchup here and both teams have been going over with teams near them in the standings. Misfits, in particular, has been playing long high-kill games lately and I don’t expect that to change here.

The books have overrated Vitality this week. They have won quite a few games this split that they had no business winning and still sit at the bottom of the standings in Early Game Rating and Gold Spent Differential. Mad Lions are the best team in Europe right now. The best teams in Europe almost always win by 10 or more kills historically. I think this spread should be closer to -9.5.

I am counting on both these teams to be up for this game. Neither has been up for every game this split and Fnatic in particular look like they have real problems to solve before playoffs, but gun-to-my-head I still trust both of these teams to be top 3 in the LEC at the end of Summer. I think we see FNC go to something more traditional in this one and see a close game, but even if we don’t I still like the over. G2 takes every Fnatic game personally. They try to kill and embarrass them at every turn. If they run over this game, we could still see it go something like 22-7.

100 Thieves is better than their record indicates. They hold a positive Gold Spent Differential despite being 5-9. That is nearly unheard of. They are also much better since adding their subs, Poome and Contractz. I think some positive regression is coming for this team and I like them to win here, but even if they lose they could cover. This team rarely gets totally blown out. Both teams are already high average total teams for the LCS and I expect a close one, so I love the over here.

Team Liquid gets first blood, TL gets first drake,  and TL has a 3k gold lead at a 1-0 kill score seems like the script for every Team Liquid game against bad teams this split. In their games against the bottom 4 in the LCS, they average a 21 kill total. I expect this game to go a lot like their game with Dignitas today where they had a perfect game going until the very end. CLG is falling apart and I don’t see them putting up much of a kill fight here.